Dan O'Neill - My Friend - October 2002
Dan O'Neill passed away last month.Some of you new member only know Dan as the name of a boat and a picture on the wall.
So I figured I would tell you about him.
Dan was a friend of mine. 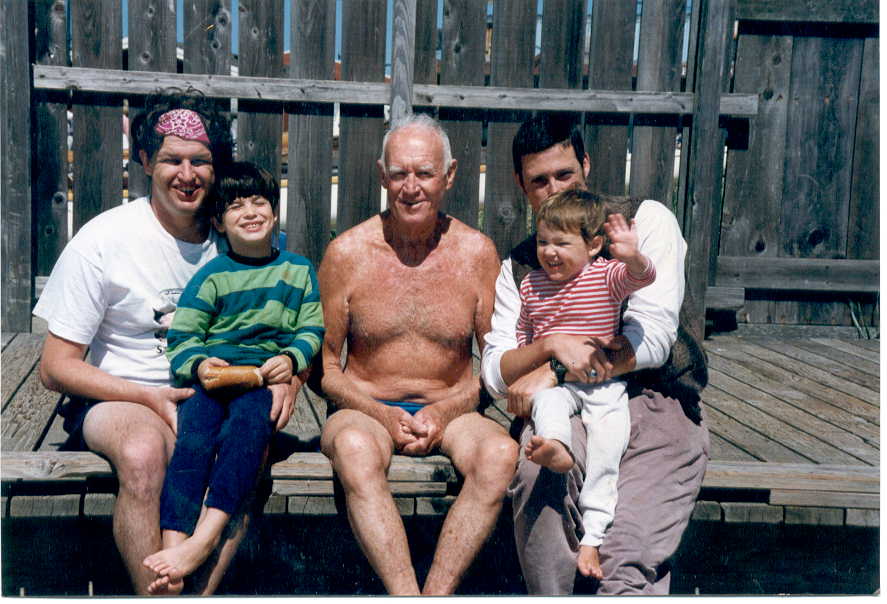 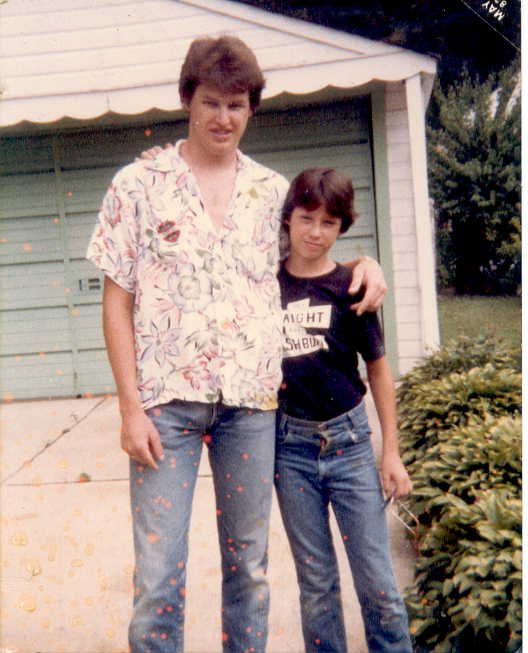 John (22yrs) and Alpo (10yrs)
In 1982 brother came to live with me and we were both attracted to the South End Rowing Club.

Dan was the Rowing Commissioner and when Pat Cuneen introduced us, Dan took a liking to us immediately. Pat was the first member we ever met. He learned that I was raising my kid brother, that Allan went to Sacred Heart, and Pat, God bless him to this day, made us feel as family.
When we met Dan, we met our 'Grandpa' we left behind in Michigan, our new family in San Francisco.

Pat and Dan welcomed us as if we had always been San Franciscans, like we were locals. Being imports from Detroit Michigan, we felt like were the luckiest guys in the world.

Dan taught me how to row, he taught my brother. He taught us well and definitively.

In turn, I would spend my Saturday morning teaching other South Enders to row. To the exacting standard taught to me by Dan O'Neill. Among my students, our current Rowing Commissioner Mr. Marshall.

Dan O'Neill would never talk much, he did not have to.
A large chested, proud, not cocky or arrogant, but a confident man, Dan was a natural mentor, a natural leader.

Dan would always go for a row with you if you asked. He always had a pointer, maybe the tides, maybe your stroke, but he was always a teacher. And as a big stupid student, I listened. At the end of the day, he would always ask about my brother and sometimes, just enough, let me know that he was proud of me for taking care of my own.

At the time I had a successful business on Hunters Point, and I joined the Police Athletic Club, where Dan was also a member.
My brother and I dropped out of the club for about 6 years.

Back in the day, the old timers (George Dillon...God rest his soul ) would hound you "are you a member?", everyday, every single day. Sad to say, it got old.

We both later rejoined in 1992. Dan and Pat were still there. Dan was older and looked his age. But his grace, his strength, his pride, his integrity were still there. He was an older guys, an old-timer then, but he was respected, gee's he was 'Dan O'Neill. 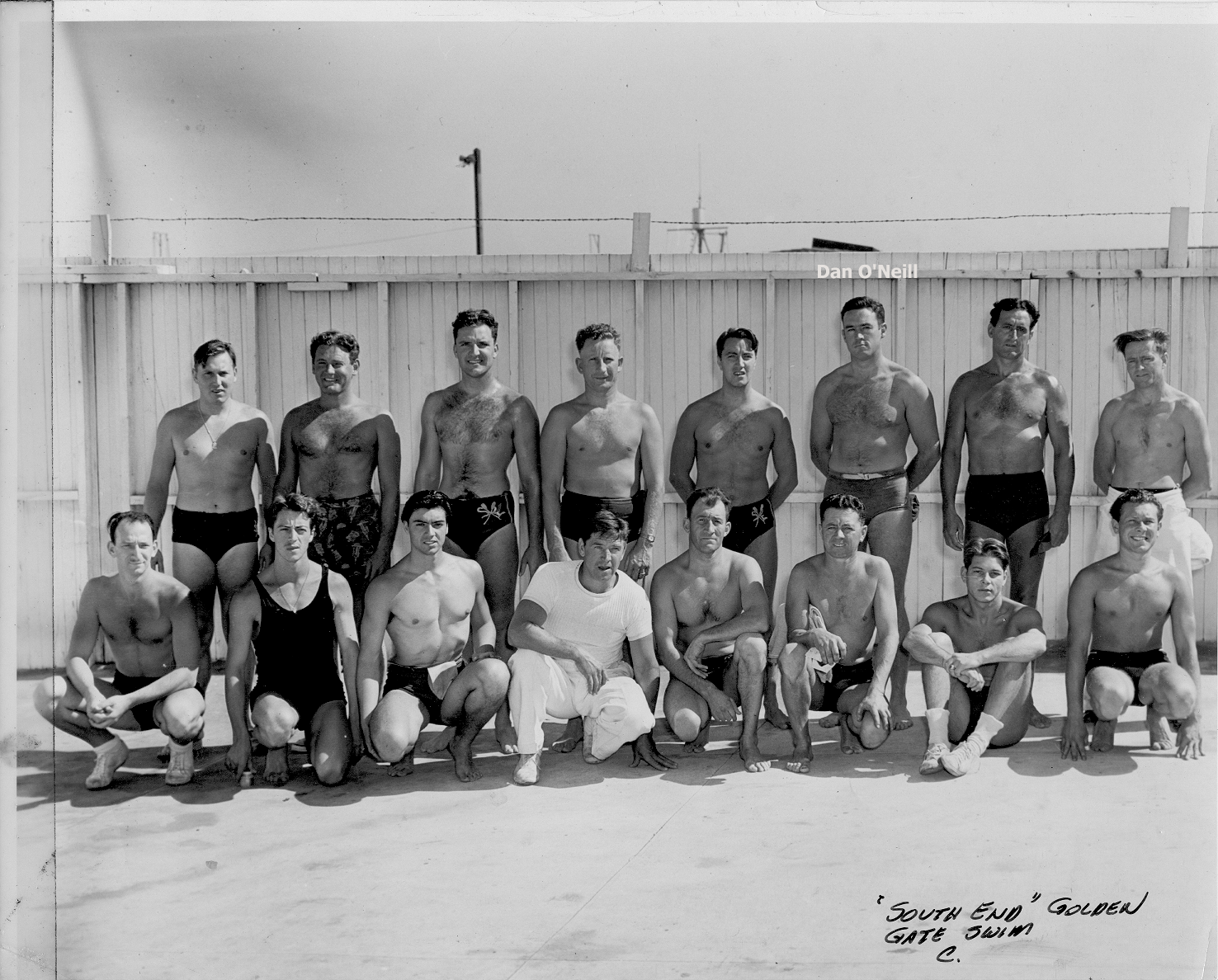 It was a tradition for Dan and Sal Reina ( yes, his family donated a boat in his name) to row around Alameda every year in the fall. There are pictures in the cookshack of Dan and Sal's trips. This is a 26 mile trip. About 10 hours of rowing.

Sal Reina died a few years later, and Dan did not do the Alameda row for a few years. One day Dan asked me if I would row with him around Alameda.

Footnote: This is like the Beatles asking if you want to 'sit in'? Or for you knuckleheads born after 1970, its like like the guy from 'Flock of Seagulls" asking you for hairspray!

Of course. I said 'cool' (privately thinking 'Like Wow!!) and Dan and I made this trip 4 times over 4 years. Sometimes out of the South End End, sometimes out of the Police Athletic Club, where we were both members. What was I thinking !?!?! Rowing for a long time equals 'pain' squared times five! God, did those trips hurt!
Dan and Sal, over the years, made friends in Alameda, a couple, who one day, years earlier, as they were tired and had to stop, and this couple let them use their dock.

Well, Dan always brought them a present, a bottle of wine, a piece of fruit. And when I went with Dan, we always stopped at their place,and Dan, always welcome and always bearing a gift.

And we were always unannounced.

Dan introduced me me as 'his friend', never saying much about Sal's passing, and they never questioned.

They were always very gracious and kind hosts, they opened their home to us.

One year we arrived, only to learn that the wife had passed. Dan never talked or met or called these folks other than his annual visit. It was just accepted, it was, what is was.
In 1991 I was having problems with my marriage. I was separated from my wife and living with a lady friend. I would row a few times a week with Dan out of the Police Athletic Club.

My situation did not set to well with Dan. He was an old school Irish Catholic and did not believe in divorce.

He offered to have a friend talk with me, Father Charles Dulley, another South End legend, to counsel me about my separation.

As we would row, he would discuss the merits of family, the impact on my children. And I was thinking 'for a guy who does not talk much, this is damn "chatty".

Well I listened, I figured if Dan is upset with me I must be doing something wrong. He had that affect on you.

I believe we made this row on the day of the Oakland Hills Fire, we were out for 6 hours on the bay and watched the fire go from a small flame to an entire horizon.

I went back to my wife and made peace. So well in fact, that a few months later, Joan became pregnant with Conor.

Conor O'Neill McGovern-Calder was born on October 17th, 1992. I named him after Dan.

I figured that was was no better man to be a role model for my son than Dan O'Neill.

Conor was baptized at St. Philips Church in Noe Valley when he was 2 years old. Dan was his Godfather.

During the ceremony, before he was baptized, while Dan was holding him, Conor dunked his head in the baptism water and started blowing bubbles. I love that kid!
A few years later Dan and I were rowing at the PAC. My marriage was bad again and I took to smoking.

Dan did not approve.

Being a life long athlete, Dan saw no merit in smoking.

So we were rowing one day. Dan telling me a story about a famous baseball player who used to advertise 'Lucky Strikes' cigarettes.

Dan was frustrated because he could not remember the baseball players name. Drove him nuts all day.

When you row at the PAC, you have to lift your boat with an electric crane, and the boat is always on the windward side. A real Jerry rig, and very dangerous.

We were lifting the boat, I was on the crane, Dan was holding the boat, steering it as it lifted from the water.

Well Dan took a misstep, and fell off the dock. He was in his late 70's and fell about 8 feet, flat on his back, splitting open his head.

I ran over, terrified, and Dan looked at me, blood covering his face, and said "Ted Williams"

Only a fine Irishman brain works better better when you smack it a few times!

Sadly, this accident lingered with Dan. He would become dizzy at random..

Within a few months, Dan, who lived in the Marina with his wife, could no longer row, or swim in the bay.

He had been a member of the South End for over 50 years.

As he looked at the bay everyday, and he knew he could no longer 'participate' in it. He left San Francisco. He moved to his sons house in Redding.

This is where Dan died.

Too proud to live by the bay in which he could no longer belong. I miss Dan

I miss his silence and his pride. I miss his wisdom and his leadership.

I miss him seeing Conor grow up. 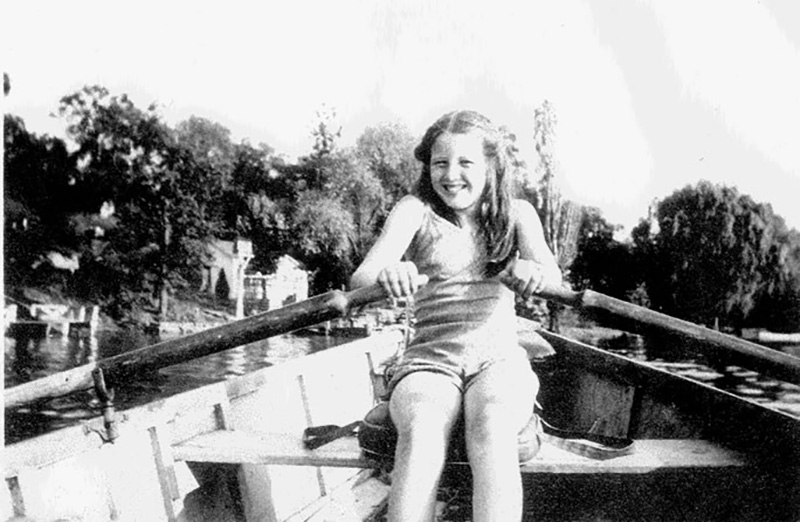 This is my Mom, circa 1947. Kathleen Freeman is 10 years old. I am somewhere in her belly! Behind her is the lakefront cottage I was raised in. It was built by my Great-grandfather from the wood from the Ecorse Rowing Club, in which he was the Founder. 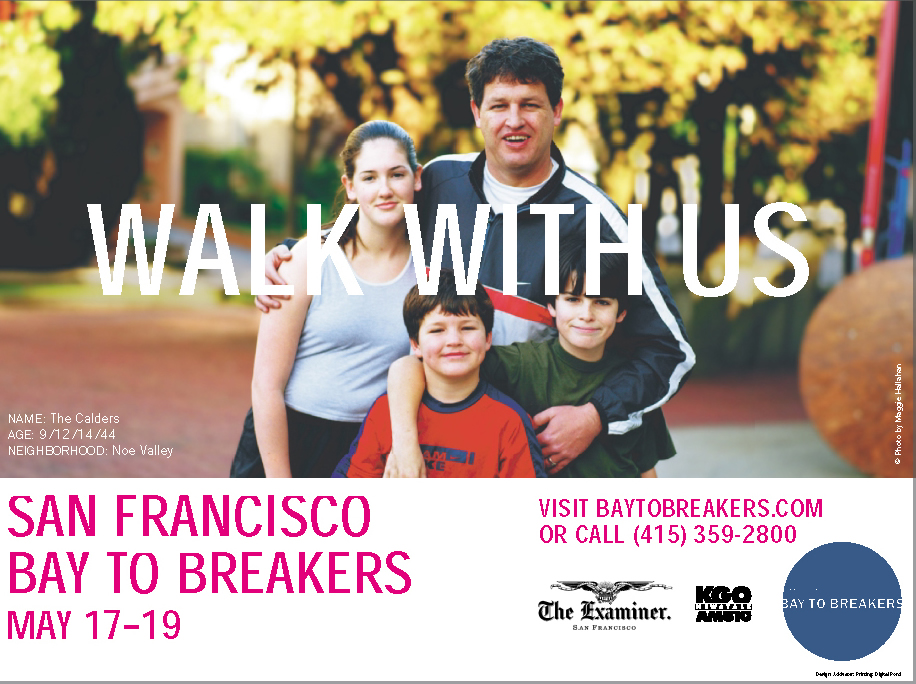